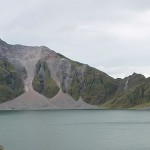 Mount Pinatubo is a volcano located on the island of Luzon in the Philippines. Nestled in the central part of the Zambales mountain range, the volcano lies 55 miles northwest of the capital city of Manila.

After lying dormant for almost 500 years, the volcano’s eruption in June 1991 resulted in one of the most destructive volcanic eruptions of the 20th century.

Thick deposits of tephra, streams of pyroclastic flow, and lahars caused significant damage to the economy and infrastructure of surrounding cities.

The volcano also ejected millions of tons of sulfur dioxide into the atmosphere, which contributed to ozone depletion and caused a worldwide decrease in temperature.

Before the eruption, Mount Pinatubo was covered with tropical vegetation and was home to more than 30,000 people who lived in villages on its slopes. Thousands of other people lived in the valleys surrounding the volcano, including US military personnel stationed at Clark Air Base and Subic Bay Naval Station. Scientists from the Philippine Institute of Volcanology and Seismology (PHIVOLCS) and the United States Geological Survey (USGS) were able to accurately predict the timing of the eruption and its effects. As a result, the Philippine government and the American military were able to carry out a timely evacuation of the population, saving thousands of lives and millions of dollars in property damage. However, the eruption killed up to 800 people and displaced thousands more by burying the surrounding land with thick layers of ash. Dams were built to control destructive lahars that followed the eruption, and recovery costs totaled billions of Philippine pesos.

The volcano’s eruption also had significant global environmental effects. Mount Pinatubo ejected millions of tons of sulfur dioxide gas into the atmosphere, forming a cloud over the earth and decreasing average worldwide temperatures by almost 1 degree Fahrenheit for several years after the eruption. The sulfur dioxide, which mixed with water and oxygen in the atmosphere to create sulfuric acid, also contributed to a rapid destruction of ozone. The ozone layer hole over Antarctica reached its largest size when observed the year following the eruption. 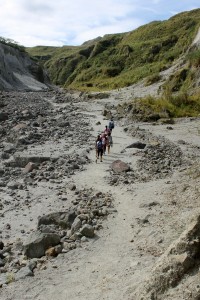 The volcano today is a safe place to visit. The crater of the volcano is a beautiful lake that is 2.7 kilometers wide and the water is crystal clear. However it is advised not to swim in the water of the lake.

Trekking Mount Pinatubo is a popular activity among locals and foreigners alike. The mountain is located only about 3 hours away from Manila. It is easy to get there by oneself but it is best advised to join a tour.

Although the volcano is still active, it is very closely monitored and any activity will most likely be predicted, thus trekking there is a safe activity, especially when it is done in the presence of local guides who know the area.